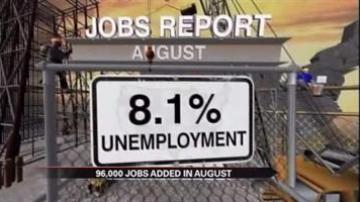 Employers added just 96,000 jobs in August. That was lower that experts predicted.

And while the unemploment rate dropped from 8.3 percent to 8.1 percent, more work still needs to be done.

"People who are of working age who are actually working is now at about 65%, that's its lowest level since 1981.  It's really bad," said Aaron Trask of Yahoo! Finance.

Unemployment is down because the government only counts people actively seeking work as unemployed. That means more people gave up looking for jobs.

Econonomists say at least 150,000 jobs need to be created to keep up with the growing population.