Fewer taxis in Elkhart due to loss of funding 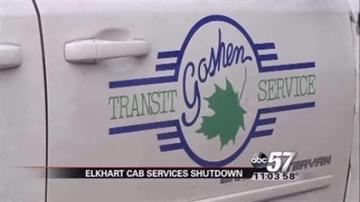 Vicki Young uses the city rider discount card to take a taxi to the grocery.

Young said, “This helps out a whole lot because I can ride to Kroger from here and it costs me about $2.”

Thursday Vicki had to wait over an hour for a cab to pick her up.

Yellow Cab of Elkhart pulled 12 vehicles and 18 drivers from the road.

Vice President Arthur Forbes says they had no choice after the Michiana Area of Council Governments didn't fund a large portion of the cab fare for passengers in the city rider program.

Young said, “MACOG has withheld up to $40,000 in billing to us due to possible mistakes the drivers may have made or errors that dispatch made but it’s all technicalities. They take a red marker and just cross those right out and we’re denied that payment."

The dispute is costing customers like Young who rely on that discount to get around Elkhart.

Young said, “Without the city rider it would cost me so much more. I’m on a fixed income and can’t afford to be paying a high bill.”

Arthur Forbes said MACOG is working with him to figure out the issue.