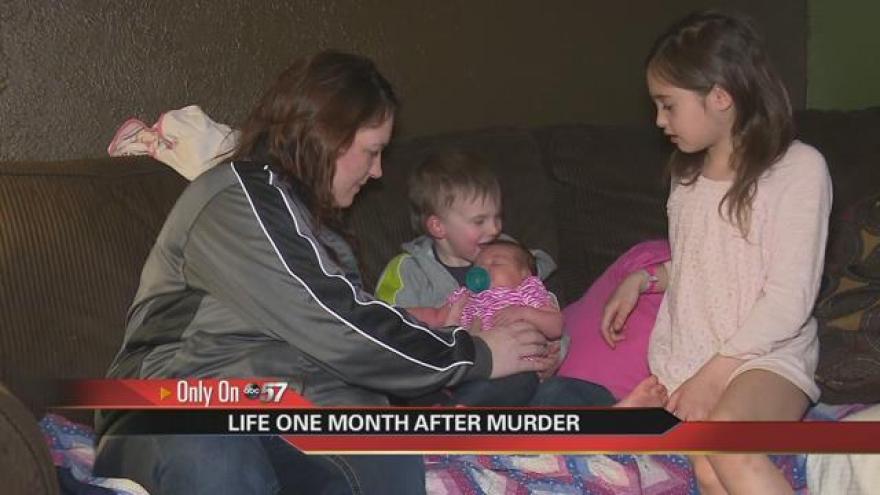 Exactly one month after a Starke County man was stabbed to death, his fiancé sat down exclusively with ABC 57’s Jess Arnold to share how she’s moving on for her new baby.

“This morning was a breakdown,” said Keanna Knight, the stabbing victim’s fiancé.

“Everybody says it will get easier, but I don’t believe them, not yet anyway,” she said.

Brad and the man being charged with his murder, Matthew Schutz, were arguing in front of Schutz’s house on Dawn Drive.

Then, Schutz snapped, pulling out a hunting knife and stabbing White, all while Keanna watched.

Police say Brad ran and collapsed in front of a neighbor’s house, while Matt ditched the knife in his backyard.

“I hope that he does a lot of time. I feel like that he should be there for the rest of his life,” said Knight.

She feels like he should have to live the rest of his life behind bars, since her new baby, Breanna Sue Knight, has to live without her father, for her entire life.

“She’s a mini him. I don’t know, I wish he could be here, and I know he would have been proud, definitely,” said Keanna.

Breanna was born on January 31st, two weeks after her father died.

“I have happiness, but it’s not complete,” said Knight.

“I did take them to the hospital to keep my word on her coming home in them, but they didn’t fit her. They still don’t, so she’s got little sockies.”

Keanna says they remind her of Brad.

She also has a pair of her own Jordans.

If the kicks aren’t enough to keep her going, she says all she has to do is gaze at her new baby girl.

“Not only her, but I have my two other ones. They pretty much give me all my motivation. If it wasn’t for them, I wouldn’t probably get up,” she said.

Matthew Schutz has already had his initial hearing, where they changed his charge from voluntary manslaughter to murder, and he’s now being held in the Starke County jail without bond.

The next time he’ll be in court is in March, and Keanna says she plans to be at every one of his appearances until he’s behind bars for life.