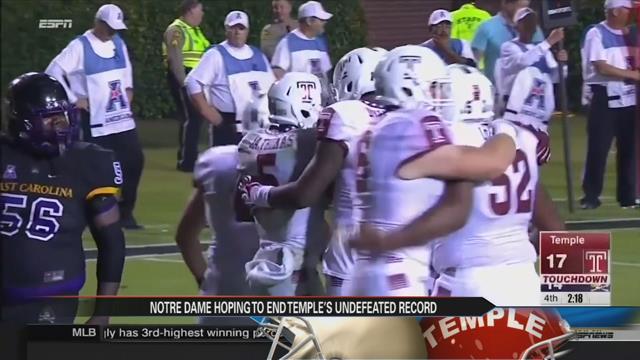 The Notre Dame Fighting Irish are headed to Philadelphia this weekend to face undefeated Temple.

And while the Irish are used to winning football games, it's a different story for the Owls.

Head Coach Brian Kelly says he knows the hurdles Temple and other small schools have to overcome to win like this. After all, he built up two programs himself in Central Michigan and Cincinnati. And with Temple's David vs Goliath mentality, he says his Irish can't be complacent.

Head coach Matt Rhule's Temple Owls are on a historic run. 7-0 and ranked for the first time in 36 years.

"We are kind of going at it full boar right now," said Rhule.

"I've been worrying about this darn Temple team," said Coach Kelly. "They're driving me crazy. It's a really good football team."

The Irish defeated the Owls back in 2013. That game put the team on Kelly's radar.