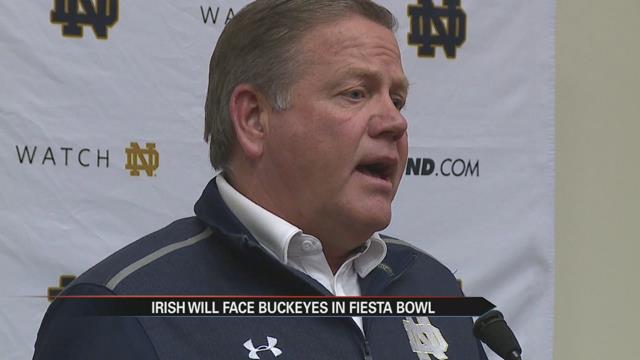 The Fighting Irish are headed to the Fiesta Bowl to play Ohio State at the University Of Phoenix Stadium on New Years Day.

Coach Brian Kelly says he sees the game as a chance for the team to end their season strong.

Coach Kelly says that when up against a strong team like Ohio State it’s important to show up prepared.

“I think you have to play a complete game. You have to understand that if one area is not strong you’re going to be compromised and I think Ohio State will compromise you if you aren’t strong in all three phases,” said Coach Kelly.

For the players it’s an opportunity to get on the field one more time and hopefully end on a high note after their loss against Stanford.

“You get your hopes so high and you set your mission to be a national championship and you start to feel a little disappointment but this is obviously an opportunity for us to play a national championship caliber of a game with an opponent that’s obviously one of the best in the country and it’s another opportunity for us to really prove who 127 is,” said DeShone Kizer .

“It’s a great opportunity for us to play a reigning national champion and the team that I think a lot of people have a bunch of respect for so that has to excite you about the game,” said Joe Schmidt.