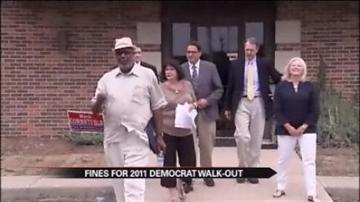 In 2011, all but three Democratic lawmakers in the Indiana House walked out in an effort to stop right to work legislation from going through. Because it lasted so long, Republicans fined the Democrats for each day they missed work. Democrats fought against paying the fines all the way to the state Supreme Court.

When Republicans tried to introduce right to work legislation in 2011, all but three Democrats fled to Illinois.

It’s a tactic that has been used since the Civil War.

With the democrats missing, nothing could be done at the Indiana House.

Shortly after the walkout began, then Governor Mitch Daniels convinced the Republicans to drop the right to work legislation, but Democrats stayed away demanding 12 bills be dropped - including school vouchers.

The Republicans answered by imposing a $250 per day fine on absent Democrats.

If they hadn't returned in 90 days, the fines would have been more than their take home pay.

The Democrats refused to budge.

With several deadlines looming, Governor Daniels declared he would pass an executive order that would keep the legislative session open until the end of the year if he had to.

That could have meant fines up to $100,000 in fines for each of those absent members.

Eventually the democrats negotiated their return and were successful in getting the right to work bill killed for that session at a cost of about $3500 in fines each.

Democrats tried to fight those fines in state court but the fines were upheld.

They filed an appeal, but the Indiana State Supreme Court rejected it on Tuesday. It ruled it would not get involved in the fight and recommended lower courts stay out of the debate as well.