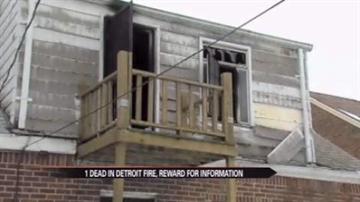 DETROIT -- A man who beat lung cancer has died after a fire bomb went off in his Detroit home.

Police say someone threw a molotov cocktail through the house's window and within seconds it ignited.

The fire broke out around 6:00 am Sunday leaving three people critically injured and ultimately killing one.

"I just heard the neighbor, she came to the door, beating on the door, saying 'everybody gets up, there's a fire. It's real bad.' She wouldn't stop, she called the fire department three times for us," said Jaquette West.

Police say this house was clearly targeted but no one is in custody. There is a $5,000 reward for any information.

Witnesses say they saw a black Impala or Malibu fleeing the scene.