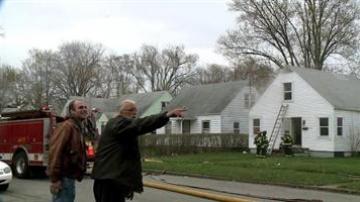 SOUTH BEND, Ind. -- High winds helped fuel a fire at a South Bend home on Monday. Firefighters got a call around five in the afternoon, and quickly realized wind was a big concern.

No injuries were reported, and no one was inside the home at the time of the fire.

Fire officials say when they got on scene there were flames in the corner of the house and they were getting dangerously close to the neighboring homes.

The fire was being fueled by the high winds, some reaching 25 m.p.h. And that was causing a lot of concern for the crews fighting the blaze.

"We were concerned because we had a lot of wind today, and wind-driven fires can be pretty dangerous, they can accelerate the fire, making the fire get worse and making the conditions inside more difficult for firefighters," says South Bend Battalion Chief Mark Catanzarite.

But crews were able to extinguish the flames quickly.

Investigators are working to determine the cause of the fire.