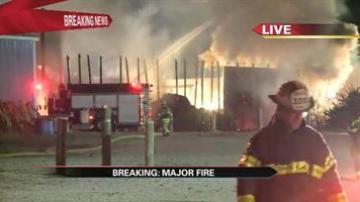 ST. JOSEPH COUNTY, Ind. -- A fire leveled one of the buildings at Abtrex Industries Monday night. The fire broke out around 9:30 and it took firefighters ninety minutes to get the fire under control.

The company is located in the 59000 block of Market Street, near Ireland Road and State Road 23 just outside South Bend's city limits.

Firefighters say the building is a total loss.

"We don't know. I talked to the owner, he hasn't had any issues out here with electrical or anything like that so we'll look into it tomorrow once it gets daylight. See if we can get a better idea," said Chief Terry Korpal of Southwest Central Fire.

Korpal says there were people inside the building when it caught fire but there were no reports of injuries.