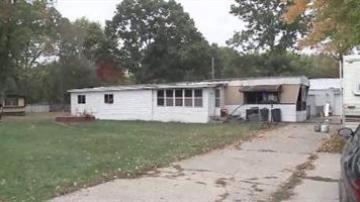 ELKHART, Ind. -- An Elkhart family is homeless after a fire destroyed their mobile home.

The fire happend just after 9 a.m. on Lark Road in Elkhart.

The homeowner and his granddaughter were able to get out of the mobile fire.

Crews had a hard tiem putting out the fire because a power line fell in the backyard shortly after firefighters arrived on scene. The fallen line had fueld the flames.

"As soon as our crews got inside, they tackled the fire and the inside," said Cleveland Township Fire Chief Ricahrd Newman. "But there was a growing fire on the outside, so that got things going again."

Fire crews had to have AEP shut off the power to the lines before they could continue to put out the flames. The fire department was on scene for more than two hours.