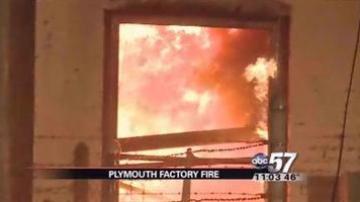 PLYMOUTH, Ind. - Saturday afternoon a fire broke out at the former United Technologies factory in Plymouth. The fire was reported around 4:30p.m.  Flames were fifty feet high.  Smoke could be seen from miles away and several fire departments were called to combat the fire along with three aerial units flying overhead dumping water on the fire.

No one was in the building when it went up in flames, but one woman in her seventies who lives across the street was transported to the hospital.  She was having breathing problems.

Cathy Wraight who lives across the street says she thought one thing as she watched The Liberty Street Depot burst into flames.

"I have never seen anything like this in my whole life", said neighbor Cathy Wraight.

She may have never seen flames this big, but she says the building has been a public safety hazard for a long time.

"We had a gas line explosion go off here last year, and last year we had to clear out", said Wraight.

She says she is glad no one was in the building when the fire started, but that doesn't mean no one was hurt by the fire.  Wraight's Aunt Vonnie lives in the senior apartments across the street and she says a woman in her complex had to be taken to the hospital.

"I just heard that a lady had to be taken to the hospital, because she had breathing problems and that is all I know, said neighbor Yvonne Wraight. Wraight says the fire department did a great job handling the fire, but she says the whole thing could have been avoided.

"The city should have taken care of this building years ago", said Cathy Wraight.

Investigators are on the scene trying to figure out what started the fire.