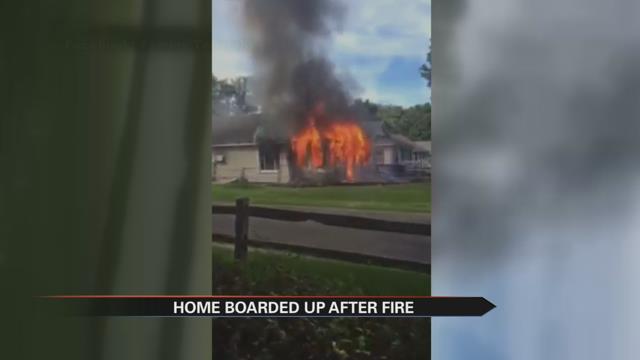 Firefighters are still investigating the cause of a fire on Forestbrook Ave Wednesday. Neighbors say the flames spread fast.

“It sounded like a campfire, crack, snapple, pop,” said one neighbor Valeri Bennell.

“We were setting in my girlfriend’s house, Val, and we heard this ‘poof!’, went out the door and there it was,” said Valeri’s friend and neighbor, Karen Zakowski.

Karen was one of three people who called 9-1-1 around 4:30 pm Wednesday when she saw flames engulfing 52361 Forestbrook Avenue in Clay Township.

“The front porch area of the house is what was involved,” said Clay Township Fire Marshal Dave Cherrone.

“Lot of flames, lot of smoke. It scared me. And then the dog whining next door. We couldn’t get to him,” said Karen.

The dog is fine, but the raging fire melted the window shade and drain pipe of the house next door. And the new fence posts are going to have to be replaced.

“The house was unoccupied at the time. We found out the owner was remodeling it, getting ready to rent it out, so there weren’t any furnishings in there,” said Fire Marshal Cherrone.

Fire crews gave the house one more hosedown before leaving first response to board up the windows.

But neighbors won’t be able to forget what they saw—and felt.

“You could feel the heat from the house next door. It’s amazing how fast it does go out. You don’t think that unless you see it,” said Valeri.

The fire marshal said they were able to put out the fire in about ten minutes.

He also said they’re still investigating what caused the fire.

The neighbor across the street said he noticed a large group of people at the house yesterday, but he didn’t see anyone there today before the fire started.