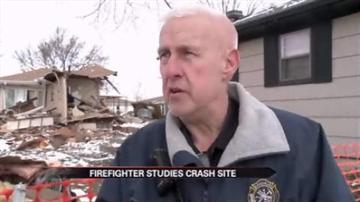 SOUTH BEND, Ind. -- Things are beginning to quiet down on North Iowa Street where a plane crashed Sunday afternoon, killing two and injuring three people. A local firefighter, who also trains firefighters, visited the scene in hopes of using the tragedy as a tool for training.

All of the heavy equipment has been removed and fewer cars are driving by to see the damage.
But one person visited the site Thursday evening, hoping he could learn something to help keep people safe in the future.

Lakeville firefighter Mike Hargreaves showed up to the scene Thursday evening to take pictures after working a full shift and teaching a CPR class in South Bend.

“I’ve been a fireman for 49 years, and over the years I’ve found that recording events with cameras will give you material to train other firemen in the future,” said Hargreaves.

As a training officer for Lakeville Fire, Hargreaves wanted to capture the carnage that was left behind by Sunday’s crash and use it as a teaching tool.

“We can look at the damage to a house and see how walls and ceilings and roofs handle the impact of this aircraft,” said Hargreaves.

Hargreaves says he can learn a lot from looking at the damage left behind.

“Even though the plane was still there, you could have the rest of the ceiling fall on you, or you could fall into the basement, or a wall could collapse on you. There is all kinds of dangers that go around one of these scenes.”

Dangers he hopes to train his firefighters to avoid.

“If we can learn one thing from this one, that keeps someone from getting hurt in the future, it’s all worth it,” said Hargreaves.

Hargreaves summed up the situation on Iowa Street pretty well.

“This is a tragedy. Some people were killed, some people have been displaced from their homes, but this neighborhood will survive and go on,” said Hargreaves.

Hargreaves says he was impressed by the coordinated response all of the agencies had to this disaster and believes that local disaster training exercises were the key to their success.