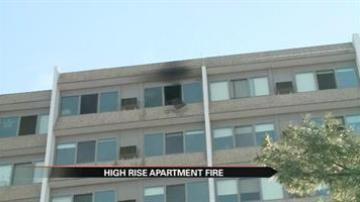 ELKHART, Ind. -- The Elkhart Fire Department is investigating a fire that erupted on the tenth floor of a high-rise apartment building around noon Friday. Only one person was injured in the fire.

The fire chief says the woman who lives in the apartment that caught fire suffered from smoke inhalation, but will be okay.

The smoke caused enough damage on the tenth floor that some of the residents had to relocate for the evening.

David Youell rushed to the Waterfall high-rise apartment building in Elkhart as soon as he got the news that it was on fire. His brother lives on the tenth floor.

"I saw it on Facebook and it said tenth floor, and Waterfall. And I said Oh! Got to go," said Youell.

Youell says he feared the worst.

"I thought it was his apartment. So that's why I came up here real quick," said Youell.

Fighting a fire so high in the sky is no easy feat.

"It's definitely not like your regular house fire. Essentially, all of the gear that we carry on the trucks, which are normally right outside of the house for the house fires, we then have to take everything up to whichever floor it is where we're fighting," said Cushwa.

The fire happened on the top floor.

"The firefighters are carrying in excess of 100 pounds extra, and then climbing all of the stairs because we don't use the elevators until we determine where the fire is," said Cushwa.

Firefighters were able to put out the fire within an hour.

Youell says even though it's Friday the 13th, he's feeling lucky.

Because the fire was so high, the top three floors were evacuated.

Cushwa says everyone is free to return.