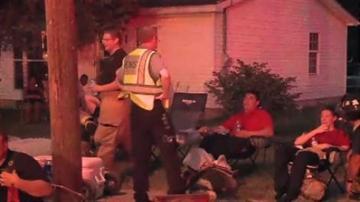 BUCHANAN, Mich.-- Fighting a 1500-degree fire in this week's heat is no easy feat. EMS personnel were on the scene of an apartment fire in Buchanan with the specific purpose of keeping firefighters hydrated.

Southwest Michigan Community Ambulance Service, also known as SMACAS, was called to the scene around 7 p.m. Wednesday to start hydrating firefighters, and the humidity and warm temperatures did not make their job easy.

Firefighters took breaks periodically to cool down with ice, fans and water.

SMACAS had a designated cooling area set up away from all of the smoke where firefighters could catch their breath and refuel.

“When you factor in the outside humidity on top of the ambient air temperature, and you throw them into their turn-out gear, put an air pack on them, throw them into a 1500 degree fire, when they come out they can’t sweat off to cool like we normally can without all that on," SMACAS Director Tim Gray said.

Gray said it is important to keep these first responders' electrolytes up so that they don't end up hospitalized with heat exhaustion.

“We also assess their vital signs. Any of them that are outside normal ranges, we monitor them and if their temperature is hitting a certain base line, at that point we start IVs on them and start hydrating them that way,” Gray said.

Gray said at least three firefighters were treated on the scene for heat exhaustion and one was transported to a local hospital.