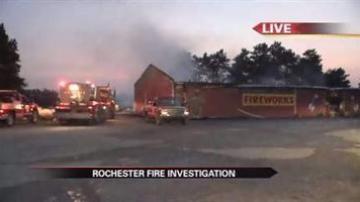 ROCHESTER, Ind. — After almost nine hours, fire crews remain on the scene of a large fire at a fireworks store in Rochester.

A fire broke out at Windy City Fireworks at around 9:30 Wednesday night in Rochester. Several departments from the area responded to the scene.

Chief Thomas Butler with Rochester Fire says they have a lot of debris smoldering due to a lot of the building falling inward when the roof gave out and the walls caved in underneath.

The fire began in a building behind the fireworks store. That building was used to store the the company's fireworks inventory.

One of the owners told ABC57 that the company is a family owned business.

The owner says there is no way to know how much inventory was in the two buidlings that were destroyed. However, the owner adds that had the supply was no where near what they would have had around the Fourth of July.

The fire chief says fire crews knew going in as they started to fight this blaze it was a very dangerous situation because of what was inside of the buildings.

Officials tell us that fire investigators will be on the scene looking into what caused the fire but they can't begin task until all of the debris is done smoldering.