First confirmed image of the birth of a planet 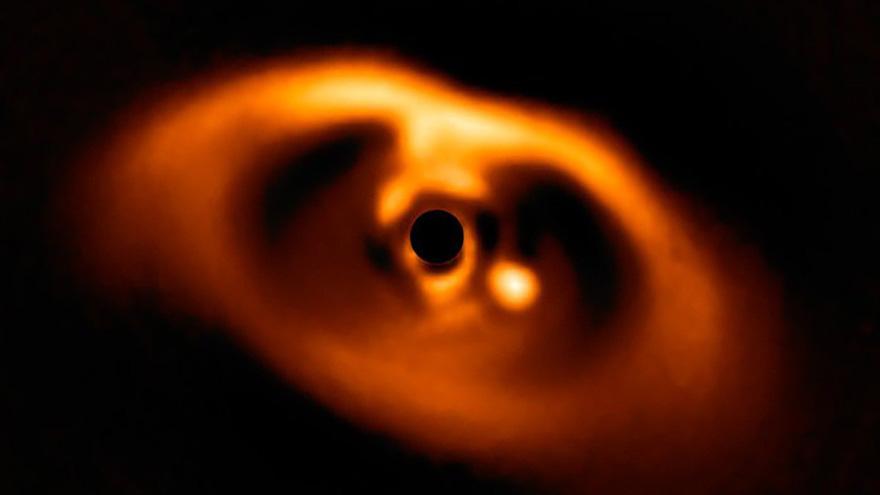 (CNN) -- A planet-hunting instrument has captured the first confirmed image of a newborn planet that's still forming in our galaxy.

To the right of the black circle at the center of the image, the round bright planet can be seen within the disk of gas and dust around the young dwarf star PDS 70. Of course, the center isn't naturally this dark. Instead, the researchers used a coronagraph to block the bright light of the star in order to look at the disk and the planet.

It's carving out a path through the disk around the star, which is in the Centaurus constellation. The protoplanetary disk is the "planet factory" full of gas and dust around young stars. The planet was found in a gap in this disk, which means it is close to where it was born and still growing by accumulating material from the disk.

The planet, dubbed PDS 70b, was detected by an international team using the European Southern Observatory's Very Large Telescope in Chile and its planet-hunting instrument, called SPHERE. The instrument is considered to be one of the most powerful planet hunters in existence.

The discovery by two teams of researchers is detailed in two papers published in the journal Astronomy & Astrophysics on Monday.

"These discs around young stars are the birthplaces of planets, but so far only a handful of observations have detected hints of baby planets in them," Miriam Keppler of the Max Planck Institute for Astronomy, who led oneteam, said in a statement. "The problem is that until now, most of these planet candidates could just have been features in the disc."

André Müller, also with the Max Planck institute and leader of the second team, said in a statement that "Keppler's results give us a new window onto the complex and poorly-understood early stages of planetary evolution. We needed to observe a planet in a young star's disc to really understand the processes behind planet formation."

SPHERE was able to measure the planet's brightness at different wavelengths, which enabled the researchers to determine the properties of its atmosphere.

This is incredibly challenging, because even though SPHERE used the coronagraph to block the star, it had to seek out the planet's signal in multiple ways.

They also deduced that it has a cloudy atmosphere.

Although the planet looks close to its star in the image, it's 1,864,113,576 miles away. That's the same distance as Uranus from our sun. It takes the planet 120 years to orbit the star, which fits with astronomers' predictions that gas giants would need to form quite far from their stars.

Directly imaging the planet is a game-changer. Going forward, researchers will be able test models of how planets form and learn more about the history of how the earliest planetary systems formed, like our own solar system.

"After more than a decade of enormous efforts to build this high-tech machine, now SPHERE enables us to reap the harvest with the discovery of baby planets!" Thomas Henning, director at the Max Planck Institute for Astronomy and leader of the teams, said in a statement.