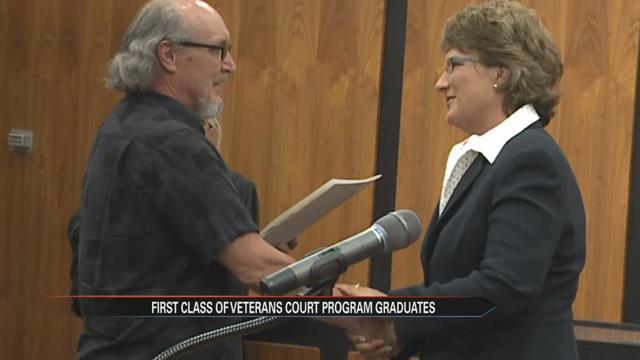 On Monday the St. Joseph County Veterans Courts Program celebrated the first veteran to graduate from the program.

The program started in 2012 and helps veterans who are facing prison time get their lives back on track.

In 2011 Air Force and Army National Guard veteran Wayne Kuritz was facing felony charges and 6 months in jail for growing marijuana in his house.

As a veteran living in St. Joseph County he was given the option to avoid that jail time and take part in the Veteran Courts program.

Kuritz was able to keep his job and contribute to society.

After 18 months of counseling, drug tests, and regular court meetings, Kuritz was awarded his certificate of completion for the program.

“It’s definitely a good thing and I appreciate the fact that the program was there. I was able to do more good on the outside,” said Kuritz.

Congresswoman Jackie Walorski, who is a part of the St. Joseph County Veterans Affairs Committee, presented Kuritz with his award.

“Today is a celebration, to be able to stand here today and award a graduation certificate to our first graduate of the Veterans Court here at St. Joseph County is a monumental historic marker and it’s important,” said Congresswoman Walorski.

Kuritz is the first of what the county hopes will be many veterans who will take part in this program.