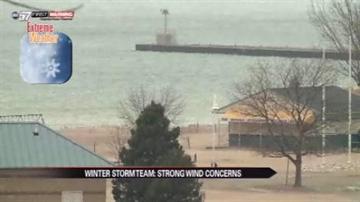 ST. JOSEPH, Mich. – The first winter storm of the season is expected to bring strong winds to St. Joseph, Michigan. The Coast Guard says waves on Lake Michigan will reach dangerous heights for boaters both Thursday and Friday.

Frigid 50 mile an hour wind is nothing new to Saint Joseph locals, but it is an excuse to stay inside with a drink to keep you warm.

"We're here to celebrate a little bit for Christmas and what happens-happens. We've been through this before,” said St. Joseph resident Bill Johnson.

The storm will be the first big snowfall of the season.

Add in some strong winds, icy conditions and holiday traveling--people may need a change of plans.

"Well we cancelled our water skiing for the afternoon. They can do whatever they want- we just don't care. But we're used to this stuff,” said Johnson.

They're not worried because they're staying inside.

Alan Douville is driving to Chicago for a flight to Connecticut.

"I think the drive from here to Chicago we're kind of worried about. The winds in Chicago and the flights being cancelled are probably our primary concern,” said Douville.

"Our concern is hopefully the plane gets into Chicago on time and with the winds they're allowed to leave on time,” said Douville.