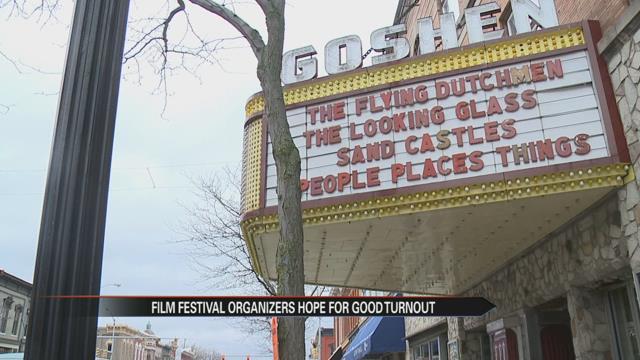 The River Bend Film Festival starts March 31st. For 14 years the festival was held in South Bend but this is the first year the three day festival will be held on Main Street in downtown Goshen.

Event coordinator Adrienne Nesbitt explains how the walk ability of downtown Goshen and the city’s central theater made the location change an easy decision.

“With the event being held in a new venue we didn’t know what to expect but we are ecstatic with what we have seen so far,” says Nesbitt.

As of Thursday afternoon, presale tickets had already exceeded the festivals past attendance numbers.

Those numbers have restaurants like Constant Springs and Goshen Brewing Company extending their business and kitchen hours.

Nesbitt is hoping this weekend will help set the stage for bigger initiatives.

“We want to build a reputation for being a community that is warm and welcome to film makers,” says Nesbitt.

A Film Indiana representative in Gary says there are limited incentives for film production here in Indiana and there are only two offices in the Hoosier state to help crews manage the available resources.

Some in Goshen want some local options.

“We are talking about creating a data base of where you go for this license who you talk to about this screening location,” says Nesbitt.

So this weekend directors and local artists are hoping the festival and the people it attracts more attention to the maple.

“This year is the first year with it down here so it is a let’s see what happens,” says Carrie Lee Kendall a Local Artist.

Kendall wants the festival to highlight Goshen as a film destination.

One of the films showing this weekend is Sand Castles a film shot in Michiana.

Kendall says she remembers the excitement and business the crew brought.

“So with film in Goshen there are so many locations that film makers can us so many resources. If it’s all in one location how easy would that be for a film maker to be able to come and say hey I want to meet about getting permits to film on this particular block,” says Kendall.