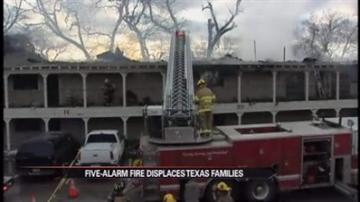 DALLAS -- More than 100 firefighters responded to a Texas fire that destroyed 24 apartment units.

Many families woke up to smoke and flames in their homes.

Multiple fire units responded to the scene. No one was injured.

Some of the units had been without water for the last few days and  even though they're without a home, they're thankful everyone made it out alive.