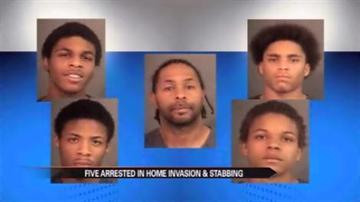 Police were dispatched to the 1000 block of North Michigan Street in reference to a burglary in progress.

When they arrived, police found five people leaving the home, some with items from inside the home.

Inside, police found two people with life threatening wounds and three others with injuries.

Two other people were also cut and a fifth had been struck with a blunt instrument. These three victims were treated and released at the hospital, according to the affidavit.

The victims told police that they were in the home when five people broke in and demanded money. One had a gun and one had a knife.

Walter Neely, 47, Khawana Lamar, 21, Lee Griffin, 19, Nate Coley, 18, and Gemari Cotton, 17 have each been charged with two counts of robbery and three counts of burglary.

Residents wonder how this could have happened in their quiet neighborhood.

West was in her home with her husband when the home invasion happened.

"We locked all the doors, all the windows. It was very comforting to know they caught the people," said West.

Other neighbors watched as police cars with flashing lights surrounded the neighborhood.

"it was pretty clear that they were trying to escape, so they could be running around the alleys or something like that so it was frightening," said resident Ryan Madison.