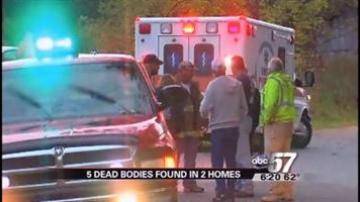 Police responded to the neighborhood after someone reported a child roaming the streets.

After speaking with the child, police decided to search the area.

"At this time, we have no idea if we have a single shooter, or if we have multiple shooters.  We also do not know if the shooter or shooters is among the dead," said Sgt. Jerry Goodin.

Right now, police are not saying how the victims were killed.

Autopsies are scheduled for Monday.

So far, no one has bee arrested.

Police say that neighbors need to be cautious and be on the look-out for anything suspicious.