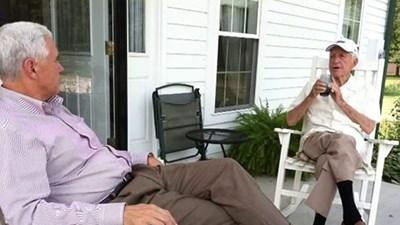 Before his time in office, Whitcomb served in World War II.

Governor Mike Pence has ordered flags to be flown at half staff for former Governor Whitcomb from now through Thursday, February 11.

"Governor Ed Whitcomb was a great man whose life of courage, service and adventure inspired generations of Hoosiers and he will be deeply missed. Governor Whitcomb was a treasure to our state and I mark his passing with a sense of personal loss as will thousands of Hoosiers whose lives were touched by this remarkable leader.

Governor Ed Whitcomb lived an extraordinary life. First called to public service with the outbreak of World War II, he joined the Army Air Corps and served as a B-17 pilot. Following his capture on May 7, 1942, he escaped a prison camp and swam eight miles through shark-infested waters. While he was eventually recaptured, Ed Whitcomb bravely escaped yet again. This harrowing account is told in his book entitled, Escape from Corregidor.

After the war, Ed came home to Indiana, earned a law degree from Indiana University and practiced law for a number of years.  He served as a member of the Indiana State Senate, representing Dearborn, Jennings and Ripley counties. Later in 1966, he was elected to serve as Indiana’s Secretary of State.

Following his election as Indiana’s 43rd Governor in 1968, Ed Whitcomb led a period of reform and modernization in state government. During his term as governor, Ed Whitcomb led the state of Indiana with common sense and conviction, improving the lives of Hoosiers.

Ed Whitcomb’s zest for life was evident in each of his 98 years. Following his retirement, Ed began sailing. He undertook voyages across both the Atlantic and Pacific Oceans, the Mediterranean and beyond. Just a few short years ago, Ed married his beloved Evelyn. Together, they enjoyed a quiet life along the Ohio River in Rome, Indiana.

Ed Whitcomb served our country, our state and saw the world throughout his incredible life. Yet, in his later years, and for all that he did and saw, Ed knew that nothing could compare to his beloved southern Indiana.

On behalf of all Hoosiers, Karen and I offer our deepest sympathies and prayers to Governor Ed Whitcomb’s family, his wife Evelyn, his children, grandchildren and great-grandchildren, and all those who knew this good and courageous man. Indiana will never forget or fail to be inspired by the life and example of Governor Edgar D. Whitcomb."

“Governor Whitcomb rose from a small community in Jennings County to serve Hoosiers in the highest ranks of our state government. A remarkable man who lived an amazing life, Governor Whitcomb was an author, an adventurer, a sailor, a war hero, a committed public servant and, above all else, a Hoosier. His impact on our state will be felt by generations to come, and I join with all Hoosiers in mourning the passing of a true Indiana legend.”

"Governor Whitcomb led a remarkable life and leaves an equally remarkable legacy. As a World War II hero, a distinguished public servant and as a world-class adventurer, he represented all Hoosiers well. Lisa and I extend our deepest sympathies to his wife, his family and all those who knew and loved him."

“Janet and I are saddened to learn of the passing of former Governor Ed Whitcomb. I was fortunate to spend time with him in recent years, and kept in touch with the governor and his wife. He was in those personal moments the same patriot he was in his many years of public service: a man of integrity who always had the best interests of people in mind. His heroic service will never be forgotten by those around the world who knew of this man’s contribution to our state and nation, often times when we needed him the most. Our thoughts and prayers are now with Governor Whitcomb’s family.”