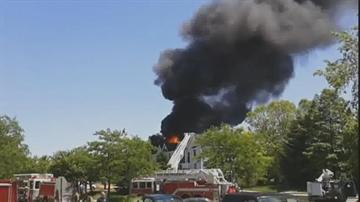 SOUTH BEND, Ind. – Flames flew out of the roof of a building at Hurwich Farms Apartments at around 1:00 p.m. on Friday sending a cloud of black smoke billowing out over Portage Road.

Everyone inside the building was able to escape safely, no injuries were reported.  Witnesses on scene said they a loud explosion that could be heard blocks away and then saw flames shooting out of two third floor apartments.

"I looked across the pond there cause I live one building across the way and I seen a bunch of flames coming out of the storage area," described Ryan Devon, who immediately called 911.  "They said they're on their way, I said they better kind of move quicker because it's starting to spread into the second and first floors."

Multiple companies of the South Bend Fire Department were called to the scene.  The first crews to arrive immediately began evacuating the building with the assistance of police officers and residents.

"Part of that roof had collapsed,” explained South Bend Fire Chief Stephen Cox.  “So our main goal was to make sure that nobody was injured."

Firefighters made it out before the roof collapsed, then fought the fire defensively by surrounding the building and pouring on as much water as possible.

In a building such as this it’s wood frame and it’s a large structure, there’s a lot of fire load within that building,” Chief Cox described.  “It just overwhelmed our capacity to perform an offensive attack.”

At least four apartments were directly affected by the fire; two appeared to have been completely destroyed.  All the residents of the thirty apartments in the building were displaced for the night and received assistance from the Red Cross.

Crowds of people living in Hurwich Farms spent the afternoon watching firefighters put out the flames; many said they were thankful their homes were spared from the fire.

“You worry about possessions, everything you can think of that you could lose all in one second you just never know what could happen,” explained Ryan Devon.  “I’m very blessed that it’s not my building…I’m definitely getting renter’s insurance.”

Investigators were on scene combing through the wrecked apartments in the late afternoon, but an official cause has yet to be determined.