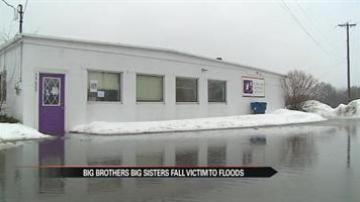 ELKHART COUNTY, Ind. -- Big Brother Big Sisters of Elkhart County took to social media Thursday in a desperate attempt to get the community's help to stop water from flooding into their building. Several inches of water seeped into their offices as the rain and melting snow overwhelmed the drains.

"There's about 8 inches of standing water in front of our building even with the drain," said Stephanie Patka of Big Brothers Big Sisters of Elkhart County.

There's a drain under all the water, but the water isn't flowing through it.

Underneath all the water is a sheet of ice.

The combination of melting snow mounds and nonstop rain didn't show this office any mercy.

"We didn't really even have time to sit and make calls. We had to get working on the problem immediately simply because the water was coming in so fast," said Patka.

Big Brothers Big Sisters is a non-profit organization, they say the flooding is taking a toll.

"Like most folks, flooding isn't covered by insurance. So we're going to need some assistance with replacing the carpet and some shop vacs so that would be very helpful for us," said Patka.