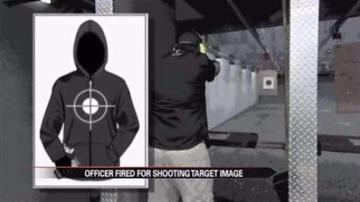 CAPE CANAVERAL, Fla. — A Florida police officer has been fired for bringing shooting targets with Trayvon Martin's image to a training session.

The shooting targets bear the likeness of Martin. The targets feature a faceless figure in a hooded sweatshirt with skittles and iced tea.

The officer has not been charged with any crime and so far is not appealing his termination.

"Others are accusing me of something that I just plain did not do," said Ron King, the police officer accused of bringing the targets. "I would like to start my statement by first apologizing to the family of Trayvon Martin for being used as a pawn in somebody's political agenda."

King said he created those targets as an example of what not to shoot at. He says that they were simple tools used for training.