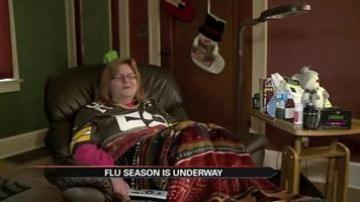 GRANGER, Ind. -- A weekly report done by the Centers for Disease Control shows that flu activity is up across the country. And some doctors say they are seeing more cases of the flu here in Michiana as well.

Doctors at Doctors Express in Granger say in the last ten days they have seen quite a few patients come in suffering from the flu.

They recommend if you haven’t gotten a flu shot,  to get one soon.

A constant cough is one symptom Lisa Pierzakowski hasn’t been able to kick. She’s been sick with the flu for the last 3 weeks.

“Today is the first day I’m sitting in a chair. Usually I’m in bed or on the couch.”

After a trip to the emergency room, and two doctor visits, Lisa is hoping the worst is over.

“Suffering through five to seven days of the aches, fever, and chills is not fun,” she said.

And neither was the vomiting. “

The doctor said I lost 12 pounds in the week because I wasn’t able to keep anything in me.”

And that did not allow her to enjoy all the Christmas food that we all get so excited for.

“Christmas was not as fun as I wanted it to be this year,” said Lisa.

But luckily for Lisa, working as a school bus driver, she’s off until January 6th.

She thinks the bus is where she most likely caught the flu.

“I had kids getting sick left and right on the bus.”

She says she’s never gotten a flu shot and when asked if she’ll now rethink that decision“No, no, no,” she laughed.

In the meantime she says she’s been following the doctor’s orders - resting and drinking a lot of fluids.

Her husband says having her home with the flu isn’t entirely bad.

“My husband said we’re saving money this way because I can’t go shopping.”

For those who want to get a flu shot, Doctors Express at Heritage Square has over 600 left.