Flying for Labor Day? Pack your patience after Harvey 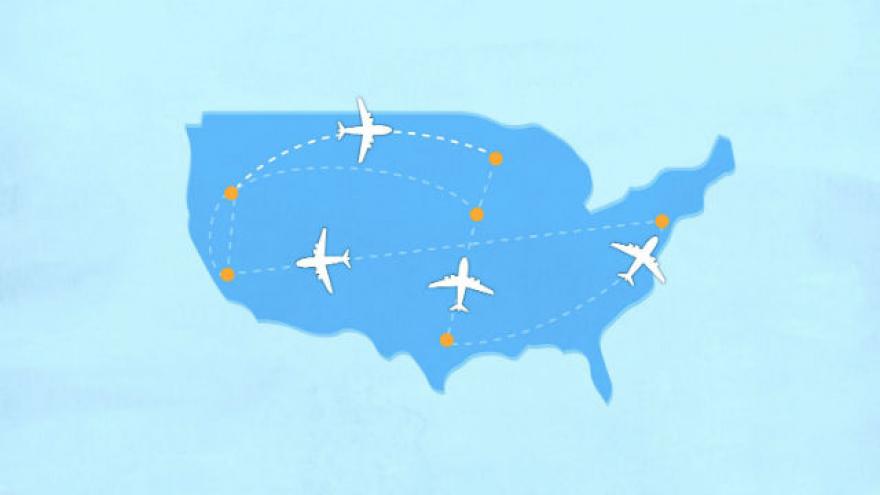 The U.S. air travel system is heading into the holiday weekend with one arm tied behind its back, with a surge of Labor Day travelers taking to the skies while Houston\'s busy airports remain hobbled from Hurricane Harvey. Photo courtesy CNNMoney

(CNN Money) -- The U.S. air travel system is heading into the holiday weekend with one arm tied behind its back, with a surge of Labor Day travelers taking to the skies while Houston's busy airports remain hobbled from Hurricane Harvey.

About 16.1 million people are expected to fly during a seven day period from August 30 to September 5 on U.S. airlines, the heart of the Labor Day travel period, according to Airlines for America. That's about 700,000 more than in 2016. And Friday is expected to be the busiest of those days.

Harvey has thrown a wrench into the operations of many of the largest U.S. airlines. It's one of the biggest disruptions to U.S. air travel since the terror attacks of September 11, 2001.

Airlines have one message for fliers: If your itinerary includes Houston, as a destination or transfer, make sure to check the status of the flight before you leave for the airport. Operations for most airlines into Houston-area airports are still in flux and will be for a while.

"Things are changing almost by the minute," said Charles Hobart, a spokesman for United Airlines.

It's going to take "several weeks" to return to full strength in Houston for United. The carrier, America's third largest, operates around 480 departures from Houston Intercontinental Airport, or IAH, on a normal day. The airport is its second largest hub and handles around 40 million passengers annually.

Hobby has resumed limited flight operations and Southwest Airlines, which operates a hub at Hobby, will start flying some flights at 12 p.m. central time on Saturday.

United and Southwest represent about 68% of the flying that goes on in Houston, the nation's fifth largest metro area, according to an analysis by Morgan Stanley.

United restarted limited flights at IAH on Wednesday when the airport officially reopened to commercial air traffic. The airline flew 44 flights into Houston and 27 out of it on Thursday. The carrier will attempt 50 regional flights on Friday.

The airline is paying many of its flight attendants extra as the rest of United's network absorbs traffic that otherwise would've gone through Houston and crews are out of place and picking up the slack elsewhere. United is operating more flights between its hubs to route connecting passengers around Houston.

United hasn't yet shared how many flights it may operate on Saturday and Sunday, but "if the operation progresses...we'll continue to offer more flights into the weekend," said Hobart.

However, if you have to travel through Houston, officially United recommends "postponing your travel until conditions improve," according to an advisory on its website.

American Airlines will operate roughly two-thirds of its normal schedule out of IAH and Hobby through the weekend and had canceled all flights that would overnight in Houston. Spirit Airlines expected to resume limited flights to IAH on Friday. Delta, which has few flights to both airports, said most of its services were getting back on track. American and Spirit each account for about 3% of the flying in Houston.

And the shutdown won't be cheap. Cowen & Co. in a report published prior to the airports reopening that United could face a $265 million impact and Southwest a $77 million hit to its third-quarter earnings.