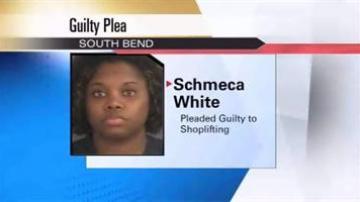 SOUTH BEND, Ind. -- A former South Bend teacher's aide, convicted of sexual misconduct, may be heading back to prison.

On Thursday, 34-year-old Schmeca White pleaded guilty to shoplifting and violating her parole.

A jury found White guilty of sexually abusing students at Green Intermediate in 2006.

She served four years, then was released on good behavior.

White will be sentenced on August 9.