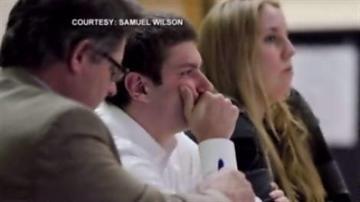 MISSOULA, Mont. -- A former University of Montana quarterback is on trial, accused of raping a fellow student.

The case has rocked the college program and calls into question how they handle reports of sexual assaults.

Wednesday, the 21-year-old victim testified that Jordan Johnson forced her to have sex after she invited him to her room to watch a movie.

The prosecution said medical findings show that it was not consensual sex but the defense claims the alleged victim encouraged and participated.

Johnson, 20-year-old, has pleaded not guilty.