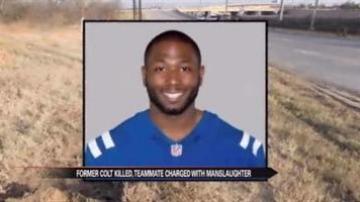 For the second time in a week the NFL is mourning the loss of one of its players.

Dallas Cowboy Josh Brent will be in court after he flipped his car in an accident early Saturday killing his teammate.

Jerry Brown, an outside linebacker, was cut from the Colts in October and joined the Cowboys practice squad.

He died at a hospital after his teammate crashed his Mercedes and it caught fire.

"When our officers arrived on scene Mr. Brent was removing or dragging Mr. Brown from the vehicle," said John Argumaniz, Iriving Police Department. "Once our officers learned that Mr. Brown had passed away, then Mr. Brent was under arrest for intoxication manslaughter."

This is not the first time Brent has been charged with drinking and driving.

He was arrested in college and sentenced to 60 days in jail.

Brent and Brown were said to be like brothers.