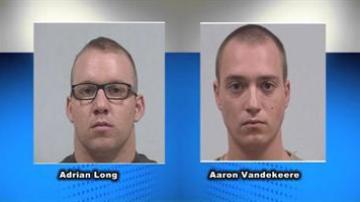 ELKHART COUNTY, Ind. -- Two former Elkhart County corrections officers have been arrested as a result of separate investigations. One is accused of having a sexual relationship with an inmate, the other is accused of smuggling contraband.

In April 2014, the Elkhart County Sheriff's Department began investigating corrections officer Adrian Long for allegedly having a sexual relationship with a female inmate.

Long has since resigned his position.

Long has been charged with sexual misconduct by service provider with detainee, a class C felony. Long turned himself in and bond was set at $20,000.

Vandekeere is accused of offering to smuggle two packs of cigarettes, a lighter, and/or a cell phone in exchange for money.

On April 24, Vandekeere is accused of meeting with an undercover officer who provided him with a cell phone and phone card.

The following day, Vandekeere allegedly took the phone into the jail without authorization and gave it to an inmate, according to prosecutors.

Vandekeere was arrested on April 25 and his employment was terminated.

Elkhart County Prosecutor Curtis Hill says in both cases, officials have no problem holding these two men in uniform to the same standards as those behind bars.

"If we have people within the system that are corrupt or abusive, it's important for the validity and credibility of the system, and for public safety, that we pull these people out of the system and properly hold them accountable," says Hill.