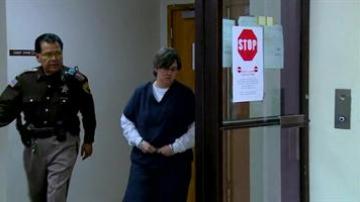 SOUTH BEND, Ind. -- A former St. Joseph County employee was sentenced Thursday. Kim Savage was charged last October when two women came forward accusing her of "catfishing" them out of thousands of dollars.

Kim Savage could barely speak through her sobs, but she did say, "I want to tell everyone I'm really sorry. I cannot pay back what I've done. I know I've caused stress in everyone's life. I know it's not only financial it's emotional. And I just want to tell you I'm sorry and if I get a second chance I will prove worthy of myself to be a citizen of this community again."

Savage's apology didn't get her much sympathy from Judge Jane Miller.

She will receive credit for 126 days already served.

The sentences will be served consecutively.

She will serve three years on probation. If she violates that probation, she could end up back behind bars.

"As you can see today from court, Kim Savage is appropriately named. Everyone's appalled by the concept of experiments on human bodies. Kim experimented on the human mind for more than 7 years," said Eric Tamashasky, head of the Cyber Crimes Unit, Saint Joseph County Police Department.

Tamashasky sees all kinds of crimes in cyberspace, but says this case somewhat mystified investigators.

"We tell people if they're not in your yearbook, if you don't know them personally, stay away. That rule doesn't fit here because they knew Kim Savage. She was supposed to be a friend and as a friend she got into their lives and just destroyed them," said Tamashasky.

Tamashasky wasn't the only one shocked by the years of bizarre evidence.

"My first comment was 'You got to be kidding.' I did not want to believe it. Couldn't believe it," said Cotter.

He said both victims were friends with Kim Savage for years.

One victim took the stand and described the situation as "mental torture."

"Kim Savage wasn't stupid about this. She was very ingenious about this, using the vulnerabilities and comments that a victim would tell her as Kim Savage and the persona," said Cotter.

Prior to her arrest, Savage was the head bookkeeper for the St. Joseph County Clerk's office. Her job was to collect restitution money from people convicted of a crime.