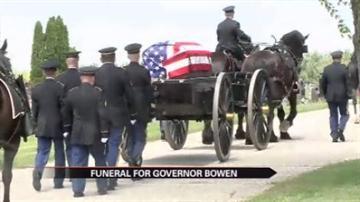 Men, women and children lined the streets of Bremen Friday.

"It all goes back to respect. The respect for what Dr. Bowen has given our community,” said teacher Mindi Blosser.

Dr. Otis Bowen was laid to rest, and hundreds showed how much they appreciate everything he did for Indiana.

"He did a lot for a lot of people; it's a big deal for this town,” said Billie Miley.

Jane Buck has known Bowen her whole life. He delivered her when she was a baby.

Over his 25-year career, he delivered more than 3000 babies.

"He did this number to me and got me breathing, so I've heard that story all my life. My birthday was last week and I'm 63,” said Buck.

With little else to give, Buck wanted to make sure the street in front of Bowen's old home was clean before his funeral procession arrived.

"I think he deserves to have it look as good as it can today,” said Buck.

Across the street, another former patient of Bowen's found himself in a familiar place, just outside the home where Bowen announced his candidacy for governor in 1972.

"I couldn't believe it, a guy from Bremen going to be governor of Indiana. Yep. I knew he would be because he just had that personality to take it,” said Rober Mikel.

Bowen was the 44th Governor and was the first to serve two consecutive terms since 1851.

A few years later he was chosen by President Ronald Reagan to be the Secretary of the Department of Health and Human Services.

"He was an average man, not above average; he was just average,” said Mikel. "He thought like I thought, he thought like most of the citizens in Indiana thought."

According to the Indiana State Police, 3 current and former Indiana governors, 2 US Congressmen, and 2 US Senators attended the funeral.