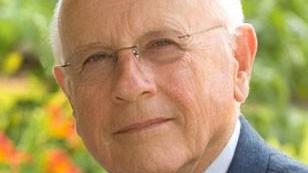 Bloomington, IN – The former president of Indiana University, John Ryan, died Saturday morning. According to a release on the University’s website Ryan was surrounded by his family at the time of his passing.

The University provided this statement this afternoon:

The entire IU community, and many across the state and the nation, mourn the passing of President Emeritus John Ryan, who died today with his family by his side. Our hearts go out to his wife, and their children and grandchildren.

For more than half a century, John Ryan played a pivotal role in the growth and development of Indiana University, and was a major figure in higher education nationally and internationally. Dr. Ryan had a remarkable vision for how the university should evolve, both across the state and around the world.

He also was a strong leader who took the helm as president at a difficult time and earned the respect of the faculty, staff, state legislature and alumni. Dr. Ryan saw the possibilities for IU as a great state university operating on an international stage at a time when few others were thinking in such terms.

During his 16 years as president, he oversaw the establishment of regional campuses in Richmond and New Albany, and the creation of a number of new schools and cultural centers on the Bloomington campus. He was instrumental in formalizing IU's Office for International Affairs and under his leadership the university forged important relationships in Asia, Africa and Eastern Europe.

Dr. Ryan remained a friend of IU after retiring as president in 1987, helping to raise hundreds of millions of dollars for the university. I personally have enjoyed John's friendship and appreciated his wise counsel since his return to Bloomington nearly a decade ago.

I had the great privilege of presenting him with the University Medal in 2009. My wife Laurie and I also will always remember the vase of red roses that John and Pat sent us a few days after I was named president. They explained that Herman Wells had sent them similar flowers over 30 years earlier when John had been named president.

Indiana University has lost a visionary leader and great friend with the passing of Dr. John Ryan. He will be deeply missed.