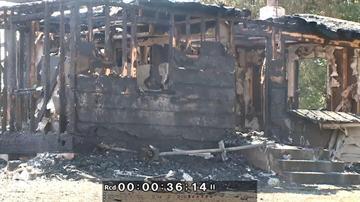 LAKEVILLE, Ind. --  Police were back out investigating a fire in Lakeville on Monday.  Sunday night around 1:30 a.m., neighbors on Quinn Road woke up to a vacant house fully engulfed in flames.

Neighbors said a young man named Matthew, who was living in the home before the fire, was arrested for cooking meth in the home.  Neighbors said they even saw a HAZMAT team enter the house.

Police on the scene say the fire marshall will be handling the investigation.

Susan Peters said she thought she was dreaming when she woke up to red and orange flames on the other side of her field.

"I thought maybe we were being invaded by outerspace hahah..cause the whole thing..because the whole field was an orange glow and I couldn't imagine what it was," said neighbore Susan Peters.

Peters said she quickly called 911 and dispatch told her there were already a number of calls about the fire.  She says ten minutes later a swarm of emergency crews showed up.

"There were at least a dozen fire trucks and ambulances and police out here," said Peters.

Peters says she was impressed with the firefighters who put the fire out in about two hours, but she says they have also had some practice with this home.

"It was October 2010 he started the field in fire," said Peters.

Peters said firefighters told her the fire was a grass fire, but she said she isn't convince, because she has smelled the stench of drugs all the way from her home.

"We have called police a couple times. I am not sure whatever happened there, but there has been activity over there," said Peters.

Peters said she is just happy the wind was in her favor for this fire.

"Thank goodness because our cats are in their and we were ready to get everybody out and evacuate, but the wind was going south so we were okay," said Peters.

And she said she doesn't think she will have to worry about fire anymore, because that house next door is burned beyond repair.