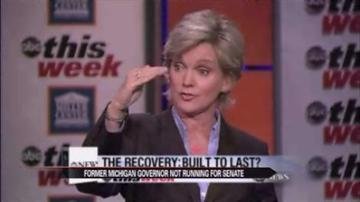 Former Michigan governor Jennifer Granholm says her name won't be on the ballot to fill an open US Senate seat.

Granholm was being considered for the seat that was left be longtime democrat Carl Levin.

She posted on Facebook Friday saying a run for senate wouldn't be right for her family right now. She did not give any other specific details.

Other democrats that could appear on the ballot include Debbie Dingell and congressman Gary Peters.