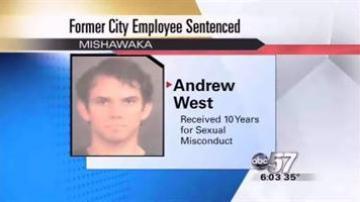 MISHAWAKA, Ind. -- On Wednesday, a former Mishawaka city employee was sentenced to 10 years in prison for Sexual Misconduct with a Minor.

26-year-old Andrew West pleaded guilty to both counts, a Class B and Class C felony, back on Aug. 29.

Police say the charges stem from sexual advances he made toward two 15-year-old girls.

According to court documents, the victims told detectives with the Special Victims Unit that some of the incidents happened at a hotel and the Mishawaka City Hall.  Prosecutors say West admitted to touching and fondling the victims during an interview with investigators.  He also admitted that he knew that both girls were underaged at the time.

West was taken into custody following the hearing.

The maximum sentence he could have received was 28 years.

West will also have to comply with all sex offender-specific terms of probation once his time is served.