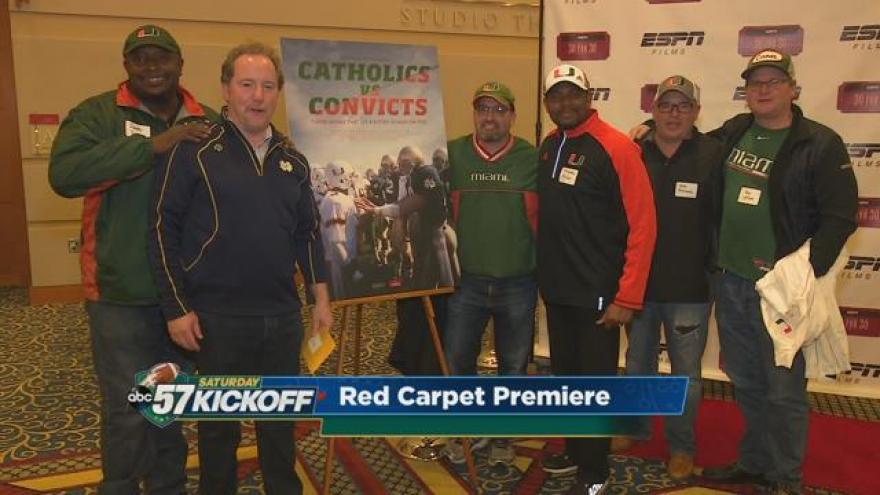 ESPN’s new 30 for 30 film Catholics vs. Convicts tells the story of a heated rivalry between Notre Dame and Miami that exploded—all because of a shirt.

The film begins: “Ten thousand stitches, one fluid ounce of ink, and nineteen letters. That was the match that lit an already bitter rivalry on fire.”

Those rivals are Notre Dame and Miami.

The person who lit that match back in 1988 is Joe Fredrick.

“My brother Chuck said, God Miami man, what a bunch of convicts, and it just hit us like man that’d be a great shirt Catholics vs. Convicts,” said Fredrick.

He’s the original creator of the t-shirts.

A great shirt turned into a decades-long controversy, and now, an ESPN 30 for 30 film called Catholics vs. Convicts.

“Just by having that theme come to, really checking out, and people being able to hear why it was brought up and how some of the feelings were hurt because of that, it’s great to hear from so many guys from so many years ago,” said former Notre Dame football player Tony Rice.

It was harsh enough that the shirt got its creator a scolding from his basketball coach.

All jokes aside—players say that watching the film brings on a surge of emotions and memories.

Pat Terrell thinks of what his father said before he left the home of the ‘convicts’ for the field of the ‘Catholics.’

“Right before I signed, he said I’m very proud of you, and you’re going to make one of the greatest plays ever at Notre Dame, and so you know, all dads are exaggerating,” said Terrell.

His father wasn’t exaggerating this time, though.

“When Pat Terrell tipped away the ball at the end, everyone had this collective sigh of yes we won this game, and I can feel it in my blood already right now pumping,” said Notre Dame alumnus Patrick O’Malley.

“I mean it was Pat, I’m happy you had a good game, but you know how much money you lost for me. How could you do that for your Canes?” said Terrell.

One thing hasn’t changed—the ‘Canes’ and Irish are still betting on their own teams for the win.

The Irish are bringing the thump, and the Hurricanes are storming onto the field with a 28-year-old grudge.