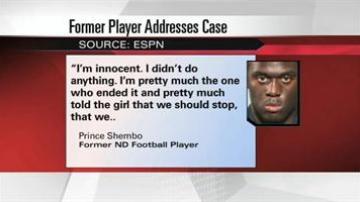 NOTRE DAME, Ind. -- Over the weekend, former Notre Dame football player Prince Shembo admitted he was investigated after a St. Mary's student filed a complaint that he assaulted her in 2010. She committed suicide days later.

In 2010, Lizzy Seeberg filed a complaint against Shembo, accusing him of inappropriately touching her.

In the police report, Seeberg stated, "I didn't feel safe in his room. He proceeded to grab my face and started to kiss me. Tears rolling down my face because I didn't know what to do…I felt so scared, I couldn't move."

Several days after she filed the complaint, Seeberg committed suicide.

Shembo was never charged in the case.

On Saturday, Shembo broke his silence in an interview with ESPN.com.

"There is a question of responsibility because she can't testify as to who started what," said Notre Dame student Emily Migliore.

On Monday, students spoke about the sexual assault policies on campus.

We contacted Notre Dame officials to find out what their policy is on reporting sexual assaults but they did not want to comment.

In the student handbook, it says, "Sexual misconduct of any kind is inconsistent with the University's values and incompatible with the safe, healthy environment that the Notre Dame community expects. Students found responsible for sexual misconduct or sexual assault will ordinarily face outcomes up to and including dismissal from the University."

We contacted Seeberg's father about Shembo's remarks. He said he has no comment.