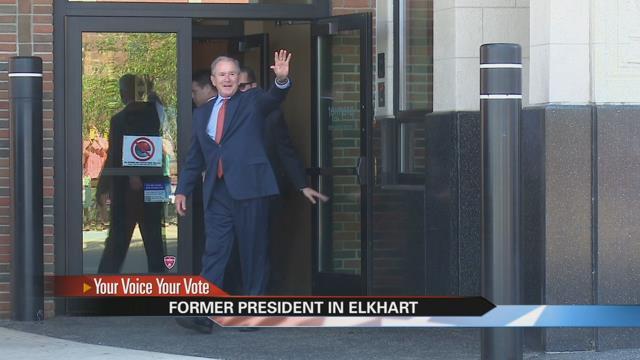 President Bush arrived at the Lerner Theatre just before noon Monday, not taking any questions from the media, but waving and saying he was feeling “great.”

Before the fundraiser – that was closed to the public – Republican Congressman Todd Young met with the media to discuss his ongoing campaign against Democratic rival Evan Bayh.

“I’m humbled to have President Bush come in town to bring visibility to our race, to highlight the fact that our message is really compelling to so many Hoosiers,” Young said.

Media could not attend the fundraiser, but Penn Harris Madison School Corporation Superintendent Dr. Jerry Thacker did attend, and said President Bush spoke for about 30 minutes, focusing on things like setting goals and the importance of family.

“He was very engaging, great personality,” Dr. Thacker said of President Bush. “I’m proud that he was president and I’m proud to be a part of this event today.”

At his press conference before the fundraiser, Young said President Bush recognizes the importance of the race to fill Dan Coats’ seat in the senate.

“President Bush, being an executive, likes people who get things done,” Young said. “And I’ve shown I can work in a bipartisan way to forge consensus around common sense conservative Hoosier ideas, to actually improve the lives of rank and file Hoosiers.”

Young’s campaign platform is to bring more jobs that pay better to Indiana, and make sure America is respected abroad.

But politics aside, Elkhart Mayor Tim Neese said continued presidential visits to the city are great.

“It’s exciting!” Neese said. “Any time a president or former president comes to the city of Elkhart, regardless of their political label, I’m supportive of that.”

After about two hours inside the Lerner, President Bush exited with Young Monday afternoon.

When asked what brought him out to campaign for Young, Bush said, “Todd Young for the Senate!”

In his press conference, Young said the following when asked what type of message he thinks it sends to Hoosiers to be campaigning with President Bush in Indiana, though both Young and Bush have not expressed their full support for Indiana Governor Mike Pence and Donald Trump as they run for the White House:

“Let me be clear, Hoosiers believe by a wide margin that Hillary Clinton cannot be trusted, that we need a change in direction with respect to our economic policy and foreign policy, and President Bush is here to highlight my campaign because I represent a clearer change in direction. So, I’m running my own campaign here, and proud to have the support of the president of the United States right here in Elkhart, Indiana.”

Young and President Bush traveled from Elkhart to Indianapolis Monday for a second campaign event.