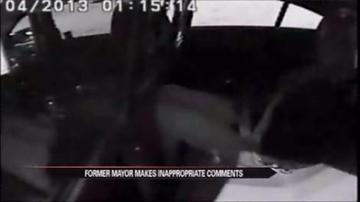 KIEL, Wis. — A former Wisconsin mayor is in trouble, but his crime is not the reason he is making headlines.

They say he had bloodshot and glassy eyes. And his speech was also slurred.

But when he got in the squad car, he started making comments about a female police officer. His comments were caught on tape.

"I would violate something to have her arrest me again," Ryan said.

Ryan was cited for his first offense of drunken driving.