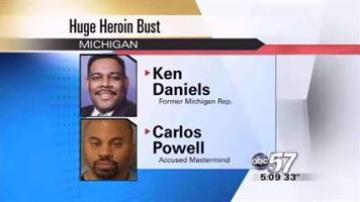 MICHIGAN -- A former Michigan representative was arrested In connection to a huge heroin bust.

The feds say they were a part of an international drug ring.

During a raid Wednesday, officers seized more than $21 million in cash, 66 pounds of heroin, 12 kilos of cocaine, and 1,000 pounds of marijuana.

Ten other people are also facing charges in connection with the bust.