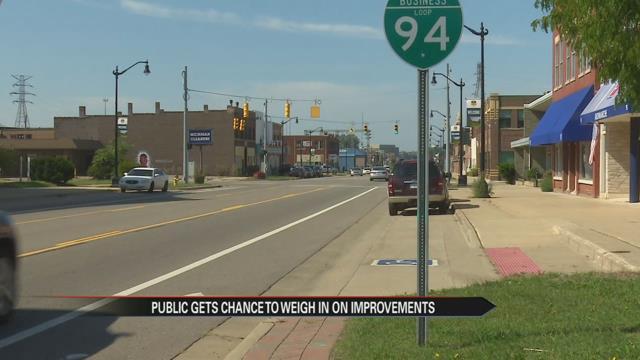 Like its high school, Benton Harbor is trying to ‘restore the roar’ by hosting a series of public forums to discuss ways to improve downtown.

“I grew up in St. Joe, but when I was a kid, everything was in Benton Harbor, there was nothing in St. Joe!” Kevin Sweeney said. “We came down to Benton Harbor all the time. The theaters were down here, stores, everything.”

Sweeney is now the owner of Sweeney’s Weenies in Benton Harbor, where he’s set up on Main Street five days a week with a front row seat to the action downtown.

“It’s good to see it coming back,” Sweeney said of downtown. “And it is coming back, but it’s a slow pace.”

Downtown Benton Harbor is in the midst of a slow revival, as a city suffering from the results of economic shifts and the wear and tear of time begins to build back up.

“We felt that the community had some input that we really needed in order for us to be able to set up an efficient plan to move forward,” Benton Harbor Downtown Development Authority President Richard Hensel said.

So the BHDDA is hosting four public forums throughout September at the Benton Harbor Public Library.

The goal is to bring community members together for a discussion about the future.

“Our mission is to try to improve the conditions for businesses to be located downtown, to help with economic development,” Hensel said.

“We just really need more businesses…down here,” Sweeney said. “You have to have a reason to come downtown. There is some here in the arts district; there’s not an awful lot on Main Street right now, but it is coming along!”

The public forum schedule is as follows:

Each forum will be held at the Benton Harbor Public Library.

Thursday, September 15 from 6-7:30 p.m. – for residents and neighborhood stakeholders

Thursday, September 22 from 6-7:30 p.m. – for residents, nonprofits, educators and media