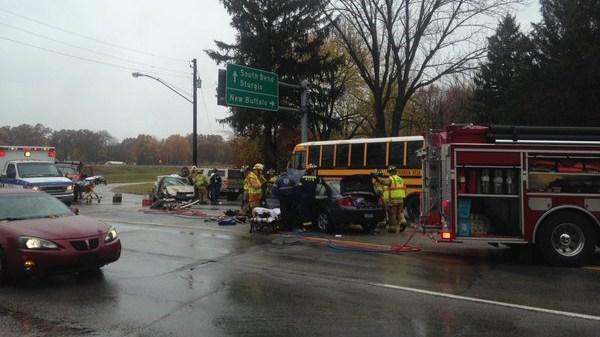 Multiple agencies responded to a four vehicle accident involving a school bus on M51 just north of the US12 exit ramp just before noon Wednesday.

According to Michigan State Police, the driver of an Oldsmobile Alero pulled from South Street onto M51 and was struck by a Chevy Cobalt traveling northbound.

The Alero then struck a southbound Berrien Springs RESA school bus and a Ford pickup.

The bus had a driver, a student aide and a student on board.

The bus driver, the student aide, the driver of the Cobalt and a passenger in the Alero were taken to the hospital.

The student on the bus was not injured.

The driver of the Alero was cited for failing to yield to oncoming traffic.