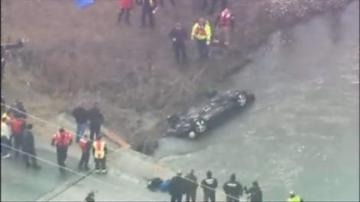 WILMINGTON, Ill. -- The family of four Illinois teens have some closure Tuesday night but it is not the kind they were hoping for.

The bodies of four teens were found in a car, submerged in a creek in Wilmington, Illinois.

A school bus driver spotted the wheels of the car and alerted crews.

Parents reported the teens missing Monday afternoon when they went for a drive after school.

"I think, still, what we're suffering right now is shock and grief at the same time.  It's such a tragic loss to try and still trying to process it," said Mayor Marty Orr.

Investigators believe the snow melt off and standing water in the road may have played a role in the crash. The four were all between 14 and 17 years old.