Four people rescued from water after boat flipped over 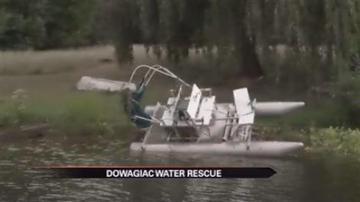 DOWAGIAC, Mich.-- It started out as a fun-filled labor day for a Michiana family, but it quickly turned scary when they needed rescued.

Dominic Rappelli and his son were cruising along Mill Pond in their fishing boat when the saw a frightening situation unfolding right before their eyes.

“We saw two or three people four people that were in the water up to their chest and an elderly lady that was also there,” said Dominic Rappelli.

Jeff Gunn was one of those four treading water.

“The current was pushing against one side and we had weight on the other and we just flipped over,” said Gunn.

Gunn, his girlfriend, and his parents were stranded in the water for over a half hour. What's worse--they weren’t wearing any life jackets.

“It was probably about seven or eight feet deep,” said Gunn.

Miraculously, they were able get a hold of police.

“Fortunately we had a cell phone that still worked, even though it was submerged in water,” said Gunn.

Gunn says he could not be more thankful to Dowagiac police, who actually had to call someone who lives along the lake to save the family, because police do not have their own rescue boat.

Gunn and his family will be taking it easy the rest of this Labor Day.

“I think we will just go and dry off and be thankful we are all still here,” said Dunn.