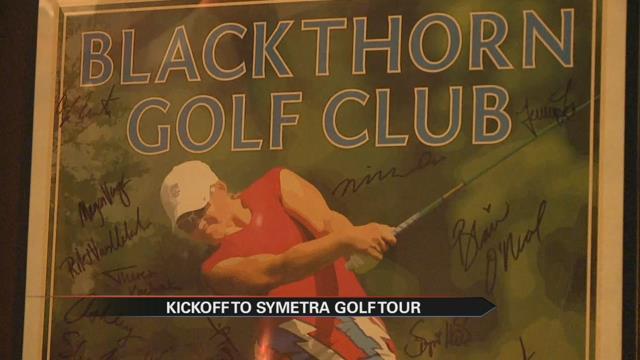 For the fifth consecutive year- the Symetra Tour,  part of the LPGA, will hold the Four Winds Invitational at Blackthorn Golf Club in South Bend.

The kick off dinner was held at the Four Winds Casino in New Buffalo on Wednesday.

Proceeds from the tournament will go to Memorial Children’s Hospital. To date, over $267,000 has been donated.

“The donations received through the Symetra Tour and Four Winds Invitational has had an extraordinary impact on our community. In fact you can see it across our community in our ambulances when the helicopter goes in the air, all of that the community has come together to fund for our children,” says Kellie Porter with Memorial Hospital.

“Would like to think this has saved somebody’s life. I’m sure it has.  That means more than money. It takes a village to raise a child. And all the children are being saved by this one event,” says John P. Warren, Chairman of the Pokagon Band of Potawatomi Indians.

“Yeah this is awesome. We are very fortunate in South Bend and a community of our size to have professional golf at this level. A lot of great local sponsors make this event possible. It’s not cheap to put these events on. This community is really invested in this tournament and neat to see it sustain this long and for many years to come,” says Firestone.

It’s also a great test for the player on tour.

“This is a great course for our players to really test their competitive nature and golfing ability. It’s got some tricky holes on it. Some places where they can score. So usually sometimes a pretty low score wins it,” says Sheryl Fish who’s with the Symetra Tour and LPGA.

“A very full field which is great. The competition is great. Definitely preparing us for the LPGA, when the purses are that high, competition comes a little stronger and it becomes much more real,” says Allyssa Farrell, a first year Symetra Tour player.

“It’s a great opportunity to showcase South Bend community, Four Winds, the hospital, the tour, it all works together. It’s a lot of fun and it’s a great cause. It’s a really worthy cause,” says Frank Freedman, COO of Four Winds Casinos.

The ladies from the Symetra Tour also visit the children at Memorial Children’s Hospital while here for the tournament.

Funds donated this year from the tournament will be used to fund med flight technologies and other emergency services at Memorial Hospital.