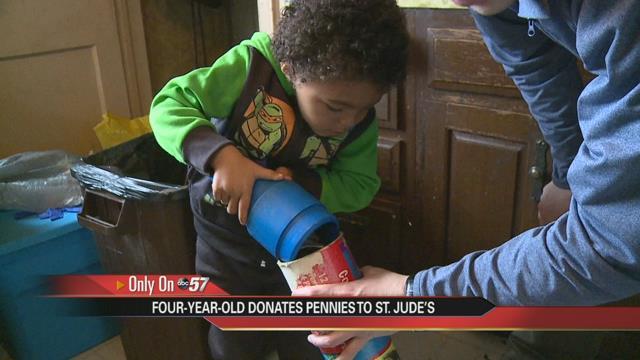 Not many four-year-olds are already saving up for college and its likely even fewer are going through those college savings, spending hours to donate their extra change for those most in need.

In the eyes of many, the value of a penny is small, almost obsolete, but four-year-old Ronnie Townsend is reminding people that no deed is ever too small.

When Ronnie heard kids were dying from cancer, he wanted to help.

Last week, Ronnie’s grandmother, Rosemary O’banion, found Ronnie on the kitchen floor, sorting out all of his change from a piggy bank almost as big as him.

It was the same change he had been saving up for college at Notre Dame.

But his grandma says, it was stressing Ronnie out, the fact that kids his age were very sick.

And the only thing that would make him happy, she says, was to help.

“I heard a bunch of change and I came in the kitchen and he was on the floor separating the pennies from the silver and he said that the angels came to him and told him that the kids from St. Jude were sick from cancer and needed his money. I was kind of shocked but then I said then I think we need to do that then Ronnie,” said O’banion.

It took Ronnie two hours to separate his pennies from the rest of his change.

After he was finished, his grandma took him straight to B100’s Radiothon at Martin’s, so he could donate his pennies to St. Jude Children’s Hospital.